Kannada Rajyotsava or the Karnataka Rajyotsava, which literally translates in to Karnataka state festival is celebrated on the 1st of November every year in reminiscence of the day the state Karnataka was formed.

The Kannada Rajyotsava day is a government holiday in Karnataka and is celebrated by Kannadigas all over the globe.

This day, celebrated with much pomp and fanfare has distinguished cultural and historical importance, especially in terms of their struggle to have a separate state considering common linguistic interests.

The History Behind Kannada Rajyothsava

The history of the struggle for a separate Kannada state dates back to the days of British in the 19th century.

Most of the region, which is now under the state of Karnataka was then governed by the British in separate administrative units.

The Kannada speaking population were divided in the presidencies of Mumbai, Madras and the Nizam, and in the territory of Kodagu.

All these territories had different languages and different cultural identities, which was then forced upon the Kannada people residing in these areas.

These people felt hugely discontented with their predicaments, and decided to revolt.

This revolt continued even after India gained her Independence and became a republic. 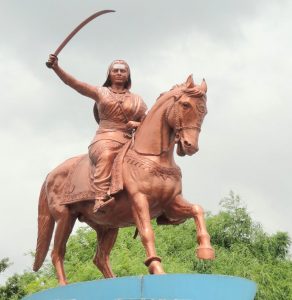 Though the Kannadigas were promised a separate state, there demands did not materialize till 1956, when, after a long standoff with the Government, most of the Kannada speaking states in South India were merged to form the state of Mysore.

On 1st November 1956, the state of Mysore, consisting of the princely state of Mysore and the principality of Hyderabad merged with parts of Madras and Mumbai presidencies along with Kodagu region, came into existence.

Though there was some disappointment at some parts of Old Mysore presidency being left out in the unification, the whole decision had a positive effect on the Kannada speaking population.

This victory in gaining an independent identity had huge importance in the state of Karnataka, and it is in the memory of this memorable event that the Kannada Rajyotsava is celebrated with all the vigour.

However the name Karnataka was not given to the state until 1973, as the people did not want to retain the name which held them back to their past identities.

So, during the rule of chief minister D. Arasu, Mysore was officially renamed as Karnataka on November 1st 1973. *

The modern day celebration of Kannada Rajyotsava is more about showcasing the cultural exuberance and rich history of Karnataka to the country and the world.

Underlying themes to protect and preserve the language and culture of Karnataka has also been prevalent during modern day celebrations.

Much of this is owed to decreasing number of Kannada speaking population and the increasing dominance of Hindi and Telugu speaking people.

This dwindling numbers has been attributed to increasing IT companies and industries in Karnataka which attracts lot of people from other states, who bring along with them their culture and language. 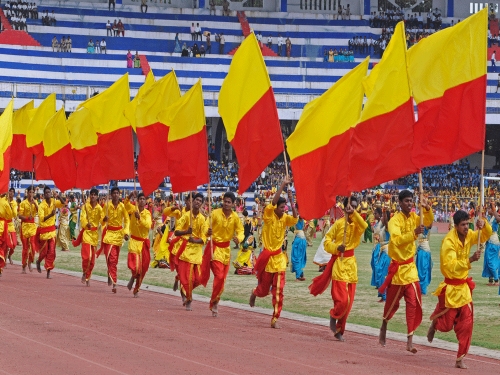 The 1st of November is however celebrated in much joy by almost everyone in the state, regardless of caste, religion and at-times even the language.

The state is painted in the red and yellow colours of the Karnataka flags, as they are hoisted at many places across the country and “Jaya Bharata Jananiya Tanujate”, which is the Kannada anthem is sung by the people.

People are generally in a festive mood and take to the streets in traditional Kannada attire of lungi, shirt and a peta turban for men and women usually donning the Mysore silk sarees.

To mark the celebrations, the government of Karnataka organizes procession to showcase the tradition and culture of Karnataka.

The procession begins with the models of Goddess Bhuvaneshvari on decorated vehicles.

It is then followed by the performances from artists, which include art forms like the Bayalata (a form of musical drama which falls under the category of Yakshagana, it features stories picked from Indian epics and ancient poetries), Kolattam ( A traditional folk dance of Karnataka involving colourful sticks), Dollukunita (a complex traditional dance form involving drums which is mainly performed by women) etc.

Karnataka is known for its classical music form of Carnatic music and many renowned musicians across the state participate in such musical festivities to promote the culture of their state in a positive light.

Some of the Karnataka Rajyothsava Song’s are broadcasted through out the radio.

Various street plays too are organized apart from the procession and musical festivities.

In order to honor and recognize the people who have contributed in a great way to the state of Karnataka, the Government gives out the prestigious Rajyotsava Prashisti or the Rajyotsava Awards on this day.

Initiated in 1966, these awards are regarded as the second highest civilian honor in the state of Karnataka.

The awards and cultural show event is inaugurated by the Chief Minister and usually held in the city of Bangalore.

Each person who wins the award gets a monetary reward of 100,000 rupees and a gold medal. 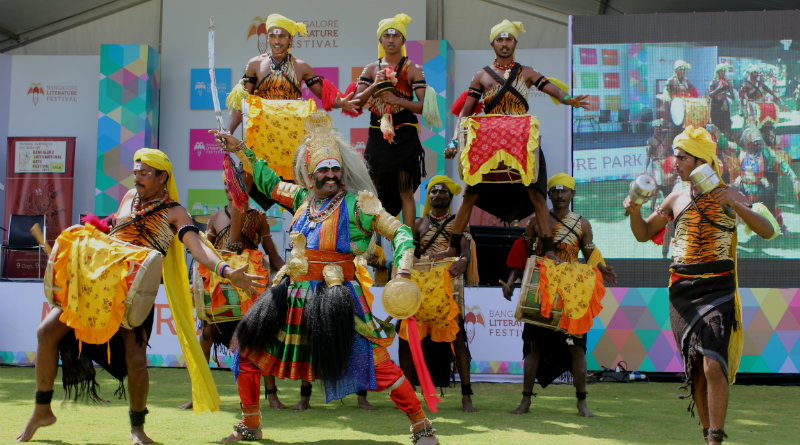 Even the private firms take active part in the celebrations, and they encourage workers to celebrate their local festival.

Most of the offices hoist flag and host cultural programs of their own, in which all employees participate irrespective of their background.

Though the nation is plagued by issues, and further demands for separate state and special recognition demands from minority communities prevailing, all of it is forgotten as people come forth to celebrate the birth of their beloved state and keep aside their differences to make it a memorable event.

And while the Kannadigas revel in their tradition and history, let us look at some facts that make them proud, rightly so.

While the list wont end here for people who are Kannadigas at heart, we are sure the cultural diversity and traditions displayed by the state in a euphoric day called Karnataka Rajyothosava is second to none and a spectacle worth being enjoyed for the same.